Alright guys its the moment you have all been waiting for.....
The Vintage Vmax LED Brake Light Test!!!

First off Chuck bought this bulb from here:
http://www.bluhmenterprises.com/products/moto-brite-lites.php?pn_category_id=29 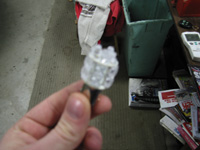 And this cheaper bulb from eBay:

The cheaper bulb has LED's only on the "top" of the bulb. The LED's also illuminate white.
The more expensive bulb has square LED's all around it and on the the "top". Though the LED's also look white they actually ILLUMINATE RED.
*this would be really awesome if someone had a clear tail light lens

Unforunatly it turned out to be harder to take test pictures than I thought. Althoguht some of the pictures arent to clear we did manage to get 5 states:

Pictures range from Standard, to Cheap LED, to Expensive LED

The pictures might not accuratly show it but this is our verdict is:
BOTH bulbs plugged right in and worked with no other modification. BOTH bulbs operated the brake light with out dimming the headlight! The cheaper of the two bulbs made the tail/ brake light worse in all states especially idle. The more expensive bulb did not change the tail light brightness for better or worse.

This test was just done in the yard and does not take in to account snow dust from the sled actually moving. However, pliminary testing seems to point to the cheaper bulb as a cost effective solution but your tail light will suffer badly. If you want to keep the same brightness in the tail light and not have the headlight dim then spend the extra money to get the bulb that has red LED's all around.


Article Index :: Models :: Forum :: My Sleds :: Your Vmax :: Guestbook :: Dedication
All Images Property of VintageVmax.com, please give credit where credit is due :)
Site Designed By: Tyler Ochs